SON OF THE BLACK MASS 1: THE CHINESE JADE

So, after laying out the approach I’m going to take with this blog in my first post, here, in my second, I’m going to show my wild and anarchistic side and throw most of what I said out the window. I’m going to devote most of this entry to a movie called THE CHINESE JADE. It’s a Japanese chambara, or sword-fighting movie. It’s not science fiction, but is it fantasy? Maybe. I’ll clear that up later, but first a commercial message bought to you by me.

As you may recall from my introductory post I mentioned WILD CARDS, the long-running sf series I’ve been part of since 1985. Or, as the suits like to call it, George R. R. Martin’s WILD CARDS, since he’s clearly the head honcho and all and has sold more books than its thirty or so other writers, combined. But I like to give credit to the little people as well (since I’m one of them) and prefer to refer to it simply as WILD CARDS. It’s also shorter and much easier to type.

If you’re familiar with the basic concept of WILD CARDS, you know that it’s about what happened when an alien race decides to use the Earth as a testing ground for a biological weapon they’ve created. If you’re not familiar with the basic concept of WILD CARDS, well, now you are. To keep it short and simple, they release a virus over the skies of Manhattan that screws with individuals’ DNA and the DNA of their children, if the infected survive to have children. Most don’t. Ninety percent die when the virus expresses itself, most quickly and horribly, some lingeringly and horribly. In the parlance of the wid card universe, they have drawn the Black Queen. Of those who survive, 9% become shambling, twisted wrecks of humanity, bodies torn, minds often shattered. These are the jokers. But that one remaining percent, the lucky 1% in this cosmic crapshoot, become aces blessed with a power, an ability, a talent that may be ridiculously lame (they can change, for example, the color their skin to any shade of the rainbow) or sublimely god-like (surrounded by a golden aura that protects them from any damage, they are granted the strength to jerk and press tanks). That’s it, in a nutshell. But nothing in the wild card universe is ever simple and clear cut, as you know if you’ve read the books. If you haven’t, you should. Me, and everyone else who writes for it, (except George) could use the royalties.

I’ve been fortunate enough to write more words in or about the wild card universe than anyone. I wrote the first role player gamebook in the early 1990s for Steve Jackson Games. I wrote the second role playing gamebook for Green Ronin (published in late 2008). I hope to write the third gamebook for an as-yet unincorporated publisher sometime in the 2100s, making it three gamebooks in three centuries in a row, but I guess we’ll see about that. Here’s the cover of the gamebook. 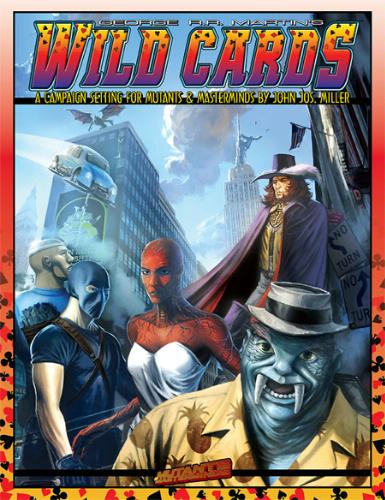 By all means pick it up if you’re interested in role playing, or if you’re a fan of the series and would like an encyclopedia with more detail than you care to know about how the wild card virus works, wild card history, and bios on approximately seventy five of the most important characters, from Ackroyd, Jay to Yeoman.

However, that seventy five characters barely scratches the surface of the wild card roll call. To fill in the gaps Green Ronin is also publishing ACES AND JOKERS, my biographical encyclopedia of about 400 additional characters who rate a line to a page in the wild card history books. I swear, writing these volumes was like doing the world’s longest term paper, though slightly more remunerative. Here’s the cover, and Amazon links. It’s due out on November 9.

Man, that took longer than I’d intended, and writing commercials is harder than I’d realized. Before I get back to the review, a quick world about methodology. By nature I am a splitter rather than a lumper. The star system of rating movies is inadequate for a finely tuned (some might say anal) mind like mine. So I’ll be grading the films on a ten point scale, 1-10. Look at it this way: 10/9 = A; 8/7 = B, and so on down to 2/1 = F. But that alone is not enough for my finely tuned (some might say anal) mind, so I’m going to add a “+” to the number where in my exquisitely-reasoned judgment I find it appropriate. So, 10+ would be for the very few, the very finest, the A+’s of the cinematic world. 10 would be solid A’s; excellent movies, but not all-time classics. 9 would be A-, almost great but maybe just slightly flawed, or slightly lacking. I don’t grade on a curve. There won’t be a lot of 10+’s, but I’m pretty liberal in terms of cutting creators slack if their works aren’t perfectly visualized, so there won’t be many 1’s either. If a film does earn a 1, however, you can be assured that it will be a real contemptible piece of crap.

This is the first of fourteen movies about the swordsman Nemuri Kyoshiro, a nihilistic ronin wandering about 1850s Japan. Raizo Ichikawa played the title role until he was felled by cancer in 1969 during the filming of the twelfth movie. He was replaced by a stand-in for the remaining scenes and then the role was handed off to another actor for two additional films, but Ichikawa’s movies are usually considered the core films of the sequence. In America the series is known as THE SLEEPY EYES OF DEATH, but the original Japanese title is the more evocative and accurate SON OF THE BLACK MASS.

Ichikawa has been called Japan’s James Dean, and not only because he died young. Like Dean, he presented a cool, languid image, almost somnolent until it was time to burst into action. Unlike Dean, he crammed a lot of work into his relatively brief career. He started in kabuki theater when he was very young, debuted on the screen in 1954 and appeared in 102 movies before his untimely death in 1969.

THE CHINESE JADE introduces the character though oddly enough tells nothing about his background. Audiences are made privy to his secret origin in the fourth movie of the series (which came out the next year, so they didn’t have too long to wait) when it’s revealed that he’s the son of a European priest and a Japanese geisha who was conceived during a Satanic ritual (a Black Mass), hence the series’ name.

JADE is a rather straightforward chambara, mixed equal portions of action and melodrama, with a complicated plot concerning a jade statue which two powerful men are after because it has hidden in its base evidence that will condemn one of them to probable execution while exonerating the other, somewhat at least, from their wholesale smuggling business. Both, unfortunately, are scumbags. Both want Nemuri on their side and try to hire him to find the jade. One of them sends a woman to draw Nemuri into the bloody plot. She does, though not exactly as expected, as the plot twists, heads roll, and numerous rather incompetent ninja are dispatched with stoic aplomb by Nemuri. Since this is a Japanese chambara, hardly anyone survives except for our hero, but as his final scene freezes on his scream of despair and rage, it’s not exactly an upper ending.

This is a well-acted, beautifully filmed movie. The plot is a bit more convenient than realistic in places and the action sequences are not entirely first class. Ichikawa is fine in both the acting and swordfighting departments. He’s cool, but mournful, nihilistic yet still yearning for the happiness that fate has denied him. The chief henchman of one of the rival scumbags is a kung fu master whose family has been in Japan for twelve generations, but he still maintains his Chinese name, looks, and, of course, bare-handed fighting style. Odd undercurrents flow between the Chinese and Japanese martial artists that an American audience might not be totally aware of, but watch for them and you’ll see. The bald, priestly-garbed kung fu master is played (under another name) by Tomisaburo Wakayama, who is best known as Ogami Itto, the executioner turned ronin of the Lone Wolf and Cub movies. Lone Wolf and Cub, Son of the Black Mass, and the heretofore unmentioned Zatoichi films (which depict the adventures of a blind sword-wielding masseur) are generally regarded as the three great chambara series in Japanese cinema. CHINESE JADE falls a bit short of a trifecta in that while Shintaro Katsu, who played Zatoichi in twenty-some movies and something like a hundred television episodes, isn’t in this movie, his brother — Wakayama — is. Wakayama (1929 -1992) is a fine actor and flashy swordsman whose kung fu, as one commentator unfortunately put it “would make Bruce Lee weep.” He survives Nemuri’s Full Moon Cut sword technique, and reappears later in the series.

In some senses this movie is almost more interesting in not revealing the details of Nemuri’s origins. The series’ source material is a number of wildly popular novels written in the 1950s, so presumably many of the theater patrons would actually know Nemuri’s background. Since the movies are so closely spaced (from 1963 to 1969) perhaps its more accurate to regard them as a species of mini-series shown on the movie rather than the television screen. Already aware of the character’s background, the audiences were probably content to watch it slowly unfold rather than appear full bloom in the first episode. According to some commentators, Nemuri’s brutality and nihilism was softened in the first movies, growing more readily apparent as the series progressed. There are also hints in some of the later movies as to possible supernatural elements in the character’s background, as he survives poisoning attempts with no ill effects as well as certain death traps with little or no explanation, much like Clint Eastwood’s character in HIGH PLAINS DRIFTER. I am looking forward to seeing more of the series and watching the character unfold.

Not all of the series is readily available in the US, though the first four episodes are packaged in a spiffy DVD set by AnimEigo, which had also released a number of them on VHS in the 1990s. They are scheduled to release the next four in a similar set this fall or winter.

You’ll probably be reading more about this series as my viewing continues.

There are no comments